Polybius is an urban legend about a rare arcade game released in 1981. The game was created by a mysterious company called Sinneslöschen (German for “Sense Deletion”) and was a puzzle/shoot-’em-up somewhat like Tempest. It was only released in a few suburbs of Portland, Oregon.

It was supposedly very popular, with people forming long lines to play it. However, players reported strange things about the game, such as hearing a woman crying and seeing grotesque faces out of the corner of their eyes. Players would also have nightmares, experienced nausea, headaches, blackouts or even develop amnesia. Some even committed suicide. Others stopped playing video games altogether and at least one became an anti-video game activist. According to one owner of an arcade, men wearing black suits would often come to collect “records” from the game.

They did not take any money, simply data on gameplay. Because of this, the leading theory is that it was some sort of government experiment using subliminal messages. The game remains in obscurity as around one month after its release, all of the cabinets suddenly disappeared. One cabinet reappeared in an arcade 1998, but quickly disappeared again. While some have tried to recreate the game, no one has ever found the original ROM. 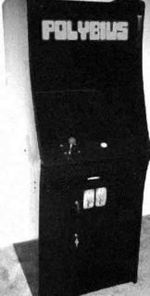